Get the full recipe for pirozhki here. 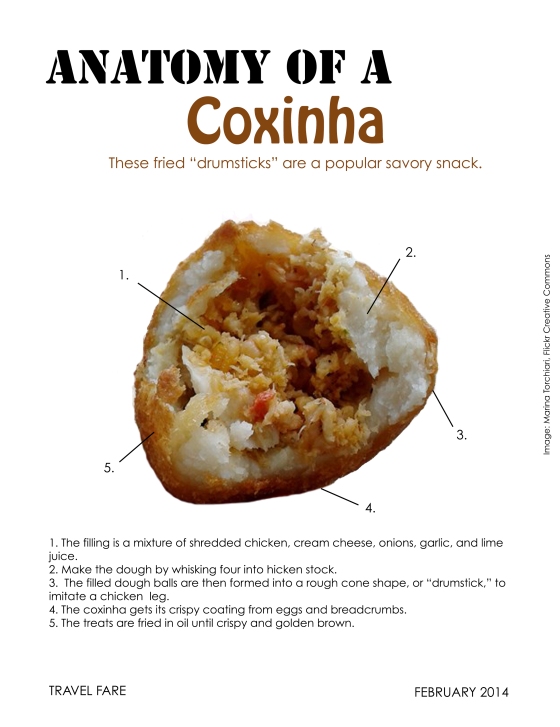 Get the recipe for coxinha here. 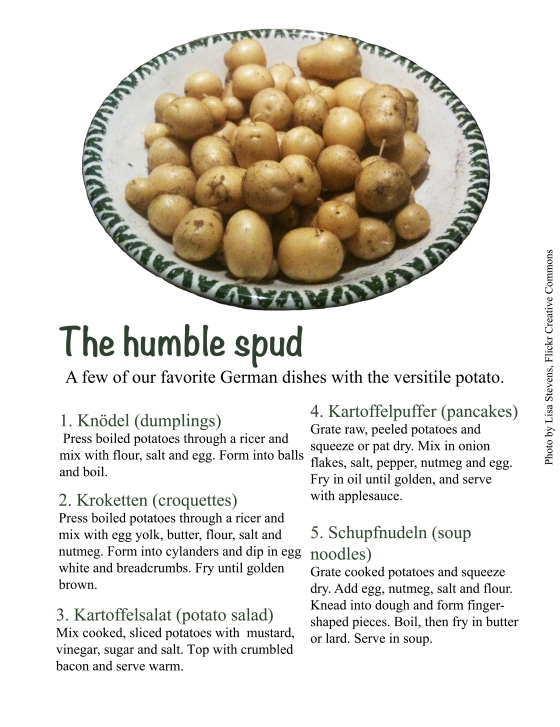 Get the recipes for: Knodel Kroketten Kartoffelsalat Kartoffelpuffer Schupfnedeln

Get the recipe for homemade pretzels here. 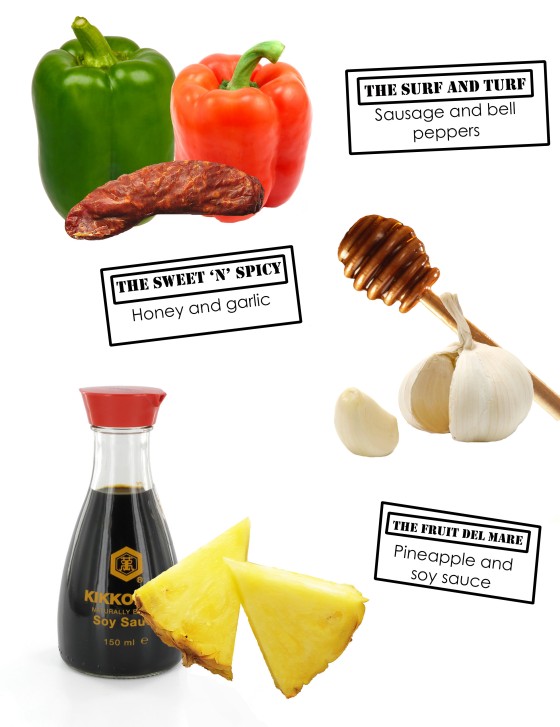 2. The Surf and Turf

A Chiko Roll is essentially an Australian version of an Egg Roll.  I remember everyone loving these on my first trip to Australia although I did not actually try one because, at the time, I was convinced I didn’t like egg rolls (I was wrong).  Chiko Rolls were originally designed to be eaten at football matches, so they were thicker than egg rolls.  They are now mass produced in Australia, but here is a recipe from KidSpot  that you can make at home!

Remove the spring roll pastry from the fridge to defrost.

Melt the butter on a medium heat in a frying pan.

Add the onion, cabbage, celery and carrot to the frying pan and cook until soft.

Add the lamb and the chicken stock cube and cook until heated through.  Add the flour and mix in.

Lay out 1 pastry sheet at a time keeping the rest under a moist clean tea towel. Lay 3 tablespoons of mixture at the bottom center of the sheet and fold the sides in to the middle and roll.

Brush the end with egg to adhere to the pastry. Cover rolls with a moist tea towel. Repeat until all the mixture is used.

Heat the oil in a frying pan. It is ready when you drop a tiny corner of pastry in and it sizzles in the oil.

Add all of the spring rolls to the oil and cook until golden.

First of all, we apologize for the state of the site these last few days! Thanks to the wonderful Happiness Engineers, we’ve got it all sorted out now.

With the month drawing to a close, we’re about to wrap up our exploration of Spain. But of course, we can’t move on before talking about one of the most popular tapas dishes – patatas bravas! This was Jen’s favorite dish while we were there, and it’s one that any self-respecting tapas restaurant should have. It’s a hearty side dish with a spicy seasoning that gives the potatoes a memorable kick.

The dish’s name means “fiery potatoes ” or “angry potatoes” (no, not “brave potatoes,” as many websites bizarrely claim – not every word is a cognate, guys!) Also note the use of the word “patatas;” if you’re an American who took Spanish in school, you probably know the word “papas” instead. This is one of the many subtle differences between Latin American Spanish and continental Spanish. If you’re planning on taking a trip to Spain, do a little research on the differences before you head over – though most people will probably still understand you, it’ll definitely make things easier.

This recipe from Serious Eats is the closest to what we ate in Spain. It has lots of dry spice and a little bit of sauce to balance the starch, but it isn’t smothered in sauce like so many Americanized versions. It’s possible that heavily-sauced versions are eaten in other parts of Spain, but this is what we ate in Barcelona.

As the comments say, there is some debate over whether or not this is classic patatas bravas. However, I can confirm that it’s the dish we had (with that name) while in Spain: Here’s a photo we took in Barcelona right before devouring the whole thing. Delicious!

This is definitely my most successful recipe this month!  Empanadas are meat-filled pastries, sort of like a Spanish meat pie.  While I made my crust from scratch, you can also use pre-made refrigerated pie crust.  I had tons of leftover filling and ended up using pre-made pie crust to make more empanadas with it.  If you are going to use a pre-made crust, just roll it out like you would any dough, and follow the same steps I used with homemade dough to finish up your empanadas!

Here is my crust recipe from Food Network, and my filling recipe, adapted from The Candid Appetite!

Empanada Dough: (You will probably need to double this recipe to have enough for all the filling)

Directions :
Combine flour, salt, and sugar in a food processor. Cut in shortening, mixture should be sandy. Add the egg and wine, pulse until dough comes together in a ball. The dough should be pliable; if not add more wine.

Assembly: Separate the dough into 3 balls. Roll the first ball out until it is 1/4 inch thick. With a 6-inch round cutter, cut circles out of all the dough. Remove the edges and save for the next roll. Fill each circle with about 2 1/2 tablespoons in the center of the dough.

Dip a small brush in room temperature water, run the brush around the edge of the dough. Close 1 side to the other forming a half moon shape. Close the edges pressing lightly with the back of a fork.

Place a large skillet over medium flame. Add the ground beef, and cook, stirring for 5 minutes, until the meat gets browned. Add the onion and garlic and continue to saute until the onions sweat and become translucent. Add the diced red pepper, green bell pepper, and diced potatoes. Cook for another five minutes stirring occasionally.

Season the mixture with the spices.  Mix thoroughly and cook and stir for 5 minutes, until the mixture is soft. Pour in the broth and simmer for 3 minutes. Allow the filling to cool before stuffing the empanadas.

Bake at 350 for about 30 minutes and serve with salsa!

Spain has one of the most interesting culinary traditions in the world. Its geography and history have given it an incredibly diverse and distinctive cuisine, with unique combinations of flavors and ingredients not found in any other country. The endless stretches of coastline provide ample seafood, and its fertile farmland produces a wealth of crops and animals (most notably the pigs for Spain’s famous hams). The Greeks and Romans brought the use of olive oil to the nation, and European Christian immigrants brought many breads and cakes used in religious rituals. But the group that had the greatest impact on the food of Spain came from much farther away: the Moors.

Originally hailing from what is now Morocco and western Algeria, the Moors were Muslims (and later Islamics) who migrated to Spain, Portugal and parts of Italy during the early Medieval period. They were not a single ethnic group – rather, the term “Moor” was used by Europeans to refer to anyone of Arabic descent. They occupied much of Spain during the Middle Ages, first conquering Spanish kingdoms in the 8th century CE. In 1212 CE, a group of Christian kings from the north and east banded together to force the Moors out and reclaim Spain. The movement was called the Reconquista, and lasted for almost three centuries. The Moorish kingdom Granada was the last to fall, finally surrendering in 1492 (yes, the same year the Spanish crown funded Columbus’s trip across the ocean blue – hey, it was a big year for Spain).

But despite being driven out of Spain, the influence of the Moors continued. To this day, their impact can be seen in everything from the medieval architecture to the language (Al-hambra, for example, is a Moorish word). Of course, the strongest impact they left was on Spain’s cuisine.

Dried fruits and spiced nuts on display at La Boqueria, a market in Barcelona.

Many of Spain’s most characteristic flavors come directly from the Moor’s northern African palate. Most notably, the Moors brought many spices (the most significant and frequently used being saffron, cumin, cinnamon and coriander), fresh fruits (chief among them was citrus, particularly oranges and lemons), dried fruits, honey and nuts (particularly almonds).  They used fruit in savory dishes, as opposed to the European tradition of reserving them for desserts. Finely ground nuts were substituted for flour, giving baked goods a more complex flavor and denser texture. They also brought new grains, such as couscous and rice, to what had previously been a flour-and-wheat driven cuisine.

Here’s a recipe for kebabs from Spanish Food World. It’s a British website, so you’ll have to do some conversions if you’re used to the American method of cooking, but it looks delicious. Originally a Moorish dish made with spiced lamb, as seen here, this dish was later adapted for pork.

Trim the meat into small bite size portions. Combine the oil with flavourings and turn the mixture thoroughly with the meat. Leave in a cool place overnight to allow the flavours to soak into the meat. The next day thread the meat on to the skewers, half a dozen pieces of meat per skewer. Preheat the grill or barbecue. Grill over a high heat, turning the skewers often, until they are wll and truly brown but still juicy. Check one piece of meat to make sure it is cooked through. Serve on the skewers and supply bread so that your friends can remove the meat from the skewers, if they so wish, using the bread.

Want to learn more about Spain’s culinary history? Check out these great sites: Spanish-food.org and FoodTimeline.org.